Since they appeared in the top searches, it seems that people – native and non-native speakers – are unsure of their pronunciation.  And for a good reason – many of these words have two different pronunciations!

Here are the words people are most curious about:

Welcome to the InFluency Podcast. I’m Hadar, and this is episode number 112. And today you’re going to find out what are the most searched how-to-pronounce words on Google.

So, the other day I was a little bored. I’m kidding, that never happens. But I was procrastinating trying to do other things, and then I was like, hmm, let’s check out Google and see what are the words that people search for their pronunciation the most.

So you know this thing where you type in ‘how to pronounce’ and then Google completes the sentence with the most searched terms. So, I was playing a little game with myself, wondering if I’d be able to guess what those words were. So, I didn’t get it. I mean, I think I got 2 out of 10.

So, in today’s episode, I’m going to tell you what these words are, and also teach you how to pronounce each and every one of them. Are you ready? Let’s listen.

Hey everyone, it’s Hadar. Thank you so much for joining me. Today I’m going to take you through the 10 most ‘how-to-pronounce’ searched words on Google. Let me explain. The other day I was chatting with my friend Google, and I typed in ‘how to pronounce’. And then I started seeing some of the keywords that usually suggest that these are the terms that people search for the most. And I was like, ooh, this is interesting, let’s see what people are searching for when they type in ‘how to pronounce’.

And I came up with a list of 10 words, which I decided they are the 10 most searched words on Google. Probably, that is not 100% accurate, but on my Google, it is. I did look it up on incognito, so it’s not designed to fit my personal needs.

Let’s get started with seeing what words people struggle with their pronunciation the most. The first one is the women’s clothing brand ‘Shein’, ‘Shein’. Which is basically a combination of two words – ‘she’ and ‘in’. So make sure you’re shifting between the high E of the ‘she’ to the lax ‘i’ of the ‘in’. ‘shee-in’, ‘shee-in’.

However, not a lot of people know that this is a compound – a word that is comprised of two words, two separate words. And people tend to pronounce it as ‘shine’ as in “shine on you crazy diamond”. ‘shain’ So, technically, because this is vastly used as well, I guess you can use it. But just so you know, that the proper pronunciation is ‘shee-in’.

The second one that came up is another brand, what a surprise, because these are the really crucial things that we need to know. And it is Nike, Nike. So, in Hebrew, we pronounce it as ‘naik’, and I guess that’s the pronunciation in many other languages as well. This is why it’s confusing. Also, the spelling is deceiving because the E at the end is usually silent, and therefore people assume that it might be ‘naik’. But in fact, it’s pronounced as ‘nai-kee’. ‘nai’ – ai as in ‘my’, and then ee as in ‘see’: ‘nai-kee’.

The following search term is ‘names’. So, I’m assuming people don’t struggle with the pronunciation of names, the word ‘names’, but with names in general. So this is why I have a video coming up for you soon about how to pronounce the most complicated names in English. But that’s for another video.

And of course, on this list you will find the word GIF. Because people are not sure how to pronounce it. Is it ‘gif’ or ‘djif’? Well, if you look at the word intuitively, a lot of people might say, “Okay, it starts with a G, like ‘guitar’, and ‘great’, and ‘give’, so it should be pronounced with a ‘g’ sound, the hard ‘g’ sound.” but others may claim that yes, maybe the word starts with a G, but other words start with the G and pronounced with a ‘dj’, as in ‘giraffe’ or ‘ginger’.

So, we can’t tell simply by the spelling. I think you’ve already figured it out, you know, if you’ve watched some of my videos. English pronunciation does not correspond with the spelling. And here there’s actually a really great video that explains the difference and claims that it should be pronounced as ‘djif’, even though ‘gif’ is also valid. And I’m going to link to it in the description.

I’m here to give you permission to use whatever you want. Because half of the world says ‘gif’, and the other half says ‘djif’. And I’ve been researching this. So, you can just choose whatever feels more comfortable to you. I personally like to say ‘gif’, but I don’t hate it when people say ‘djif’. At first, it was a little weird, but it’s just how it is. So, both are okay, use whatever you want. I’m not here to claim that one is better than the other.

The next most searched how-to-pronounce term is ‘water’. Yes. I also have a video about ‘water’ that I’m going to link to it below. But let’s talk about it. Water. We begin with a W sound, and then you drop your job to the ‘aa’ as in father – ‘waa’, ‘waa’. The length of the syllable is really important. Make sure it’s longer than the second syllable.

The second syllable is ‘d’r’. That’s a flap T that shifts into an R – ‘waa-d’r’, ‘waa-d’r’. And yes, you guys, this is American pronunciation. In British English, the T is actually going to be closer to a regular T – ‘wo-tuh’. “Can I get some water?” Water [with a British accent]. And then, the R is not pronounced in British English. And let’s not make fun of my British accent, please. Okay. So, ‘waa-d’r’, ‘waa-d’r’, right, in American English: open aa sound, flap T, and an R.

The next searched word is… is it often [aa-f’n] or often [aaf-t’n]? Well, here as well, both are correct. It’s really interesting that the most searched words are controversial words. And ultimately, there is no right or wrong. So, the most common pronunciation is ‘aa-f’n’, without the T. But pronouncing the T is not wrong, and a lot of people do that. ‘aaf-t’n’.

I noticed that some people pronounce both, depending on how they use the word in context. So, if they don’t pay attention to the word, a lot of times it’s going to be ‘aa-f’n’. And then, sometimes when they slow down, they will put in the T – ‘aaf-t’n’. Right? So, as I said, if both exist, you can use both, and both are correct. ‘aa-f’n’ – ‘aaf-t’n.

The next most searched term – and this is so funny, I would never have guessed it – is this: doge. This is an internet meme from 2013, and the way you pronounce it is ‘dowj’, ‘dowj’. It’s a D sound, ‘ow’ as in go, and then the ‘j’ sound, as in ‘vision’. ‘dowj’. You live and learn, you live and learn. What can I tell you? If you had no idea what that was, then I am here to serve. Always, always. Very useful things, very important, crucial for your understanding of English, everything. I got you covered. ‘dowj’.

The last most searched word for today is this – ‘route’. So again, here you have two very common pronunciations. So, I guess people were trying to understand which one is right. Is it ‘ruwt’ or ‘raut’? ‘ruwt’ or ‘raut’? The first one is an R sound, then the tense ‘u’ – ‘ruwt’, with a held T at the end. Or ‘raut’, ‘raut’ – ‘au’ as in ‘now’. So again, if you hear it both ways, probably both are legit and both can be used. If they’re used, you can use one of them, just choose the one that is easier for you. Is it ‘ruwt’ or ‘raut’?

Now, yes, I know that some people might watch it and say, “Hey, you know, actually, Hadar, it’s ‘ruwt’. And ‘raut’ sounds less sophisticated”. Or, “Actually, it’s ‘aa-f’n’. And ‘aaf-t’n’ it’s just a mistake”, blah, blah, blah. Whatever. You know my take on this is that if people use it, it exists, therefore you can use it as well. Pronounce it the way it’s comfortable for you because it’s going to be clear either [ai-th’r] way. Or ‘ee-th’r’ way. ‘ruwt’ or ‘raut’.

Okay, that’s it. The 10 most how-to-pronounce searched words. That was a tricky sentence there. And what other words do you think should be on that list? Let me know in the comments, and maybe I’ll create a video from all the words that you have suggested in the comments. Maybe not all the words, but the main words, the key words.

Okay. Thank you so much for watching. I hope you found it fun and helpful. And it’s always fun to see what people are searching for, and what people struggle with. And then it makes you feel good about yourself. Because hey, I’m not the only one not knowing how to pronounce Nike or doge, whatever that means. Honestly, did not know what it means, I had to look it up. Between us. I’m not very big on memes. Even though they make me laugh.

Anyway. Thank you so much for watching. If you want more good stuff, then come on over to my website at hadarshemesh.com. And I have a free audio crash course for you, and the list of the most mispronounced words by speakers of English as a second language. So you can get that list with audio, and totally free. So, just click somewhere here on the video and go get it. And if you want to follow me on Instagram, you can find me at hadar.accentsway. I would love to connect with you there.

Thank you so much for watching. And I’ll see you next week in the next video.

The InFluency Podcast
112. The most searched ‘HOW TO PRONOUNCE’ words on Google (and how to pronounce them)

Here’s the list of words with the phonetic and IPA transcription: 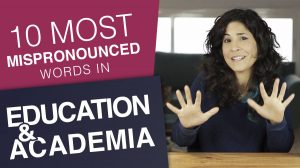 10 most used words in academia/education 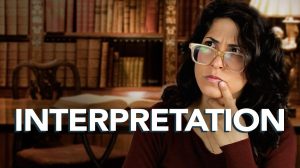 How to pronounce ‘interpretation’ 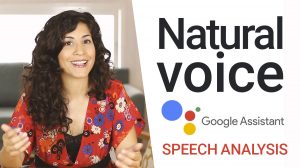 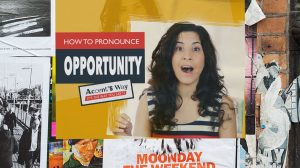 How to pronounce Opportunity