Wouldn’t it be nice to be more engaging when speaking English?

Have you ever wondered what words you need to stress in a sentence to deliver your message?
Intonation tells us a lot about your mood and thoughts and it’s what makes your speech more interesting and alive.

In this video, we’re going to analyze a part of Vice-President-Elect Kamala Harris’s victory speech and her amazing message to the women and girls of the world.

Practice with me if you want to find out how American English intonation works and how you can be more effective and clear in English.

Welcome to the InFluency Podcast. I’m your host, Hadar, and this is episode number 78. And today we are going to learn about intonation, rhythm, and public speaking from Kamala Harris, the new vice president of the United States.

Hey everyone. Thank you so much for tuning in for another episode of the InFluency Podcast. InFluency because you are constantly in fluency. It’s like you’re in motion, but you are in fluency. And also, you influence because you’re fluent. Anyway.

I had totally different episode recorded and planned out for you, to be honest. But yesterday I was sitting at my studio and I found myself getting sucked into the rabbit hole of watching a whole bunch of videos related to the elections that just took place last week in the United States. Now, I don’t live in the United States, but it was very much involved. It’s funny, cause I feel like I was more involved and excited about what’s going on, or upset, more than I was in the previous elections that we had here. But that’s a different story.

So anyway, I was watching a lot of videos and speeches and people celebrating, and I was really moved by witnessing this historic moment, where the first woman ever was elected to serve as the vice president of the United States. And Kamala Harris, who is the Vice-President-Elect, is not only the first woman to be elected, but she’s also a woman of color. She’s a South Asian black woman, which is also something that is pretty groundbreaking in the United States.

So I was happy to witness that historic moment and I started watching all those speeches, and then I watched her speech and I started crying. And it was so freaking good that I said, “Okay. No. Let’s stop. I know that there is a video planned for tomorrow, and I know that there is a podcast episode planned for tomorrow. But we need to change things around because this is such a good moment that we cannot let it go to waste.”

So, I think it was like 11:00 PM. I literally recorded this video – that we’re going to share the audio here, but you can actually go and watch it – we’re going to post a link to it in the description, but you don’t have to because there aren’t any fancy titles or anything. It’s just me speaking along with her, so the audio version is perfect. But what you could do is download the script. So I actually created a designed script where you can see the stressed words and the reduced words. So, it’s like a visual representation of the intonation that I analyze.

So I took a small part of her awesome speech – I’m going to link to the speech in the description as well – and analyzed it the way I love doing, focusing on the intent, and the rhythm, and the intonation, and pronunciation. So, there’s a lot of goodness in there. We’re going to share it here.

Again, you can download the transcript and the phonetic script. And you can also find the link to watch the video that I filmed at 11:00 PM last night. So I’m a little tired because then I had to edit it, and usually I have an editor that does that, but I couldn’t call her at midnight telling her, “Hey, listen, I have something for tomorrow.”

So I did it. I used to do it, you know, when I first started creating videos. So I still have my magic, but it’s not as tweaked and fancy as the rest of my videos because it’s not my thing – editing videos. I know how to do it, but, you know, I also know how to cook, but I prefer that someone else cooks. Especially when I’m hungry.

Okay, we are getting distracted here. Let’s go back to what we’re here about, which is to celebrate this beautiful moment and the beautiful speech Kamala gave – Kamala, that’s how it’s pronounced, Kamala.

And that’s it. I hope you enjoy it, and I hope you get to learn something. So here it is.

Hey everyone, it’s Hadar. And this is an impromptu speech analysis, which means it wasn’t planned. Because I wanted to celebrate this historic moment where it’s the first time in the history of the United States, where a woman was elected to be the vice president of the United States. And that is huge and very inspiring.

So, I watched the speech that she gave and I wanted to take a small part of it and analyze it with you together. Because what better way there is to celebrate a person’s words than to repeat them again and again? So I’m going to play it and then we’ll repeat it together, and I’ll tell you what to focus on. Okay? Let’s listen.

“But while I may be the first woman in this office…”

And what does she do? How does she stress that word? She goes up in pitch. She is all the way down here, “but while I may be the first woman in this office” – goes back to the same tone.

“But while I may be the first woman in this office, I will not be the last”.

“Because every little girl…”

“…sees that this is a country of possibilities.”

“And to the children…”

“…regardless of your gender”.

“our country has sent you a clear message”.

“…and see yourselves in a way that others may not.”

“…simply because they’ve never seen it before” – closing. “Simply because they’ve never seen it before”: that’s it, she’s closing here. Right? And think of what a profound sentence that is, right? Like, people will always have something to say just because that’s how they know things to be, but it shouldn’t change how you operate, how you dream, the vision that you have for yourself, because their opinions don’t matter. Sounds familiar?

“but know that we will applaud you every step of the way.”

“But while I may be the first woman in this office, I will not be the last. Because every little girl watching tonight sees that this is a country of possibilities. And to the children of our country, regardless of your gender, our country has sent you a clear message: Dream with ambition, lead with conviction, and see yourselves in a way that others may not, simply because they’ve never seen it before, but know that we will applaud you every step of the way.”

So much hope. And I don’t even live in the United States! Okay, let me know in the comments what you think and how you feel, and I hope you enjoyed it. And I will see you in the next video. Bye.

Get my FREE visual intonation notes so you can actually see the phrasing, reductions and stress patterns used in the scene and practice it whenever you want!
Get it 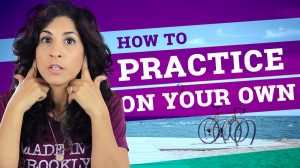 Practice your Accent on Your Own 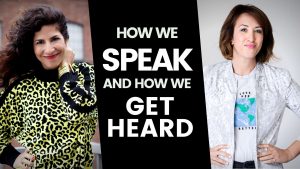 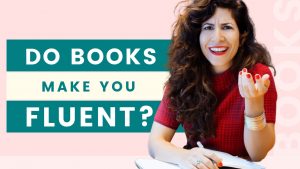 Will reading books help you get fluent? 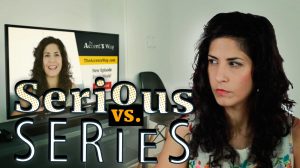